Bishop R. Daniel Conlon was born in Cincinnati on Dec. 4, 1948. He is the oldest of six children of Robert and Carla (Holzman) Conlon. He grew up as a member of St. Mary Parish, Hyde Park, Cincinnati. Following graduation from Marian Purcell High School in 1966, he began studies at the Athanaeum of Ohio/Mt. St. Mary of the West Seminary in Cincinnati, and on March 9, 1974 was ordained a deacon at the Cathedral of St. Peter in Chains, Cincinnati. He completed a Master of Divinity degree in 1975 and, after serving as a deacon at St. Agnes Church, Cincinnati was ordained a priest on Jan. 15, 1977.
He served as associate pastor at Immaculate Heart of Mary Parish, Anderson Township, Cincinnati, from February, 1977 until July, 1982. Beginning in August, 1981 until August, 1983 he served as director of the Office of Planning and Research and assistant chancellor in the Archdiocese of Cincinnati. For the next three and a half years, he studied canon law at St. Paul University in Ottawa, Ontario, earning the degrees of Doctor of Canon Law and Doctor of Philosophy in January, 1987. He returned to Cincinnati to become the Archdiocese’s chancellor and director of its Department of Executive Services, serving in those capacities until July of 1996, when he was named pastor of Holy Redeemer Parish, New Bremen, Ohio. It was while serving as Pastor at Holy Redeemer Parish that Father Conlon was named as the fourth bishop of the Diocese of Steubenville by His Holiness, Pope John Paul II, where he was installed on August 6, 2002. He chose as his episcopal motto, Take Courage.
His Holiness, Pope Benedict XVI, named Most Reverend R. Daniel Conlon, the fifth Bishop of Joliet-in-Illinois. The appointment was announced in Washington on May 17, 2011 by Archbishop Pietro
From 2011 to 2014, the Most Reverend R. Daniel Conlon served as chairperson for the United States Conference of Catholic Bishops’ Committee for the Protection of Children and Young People. As well as a member of the Canon Law Society of America and the Mundelein Seminary Advisory Board. Bishop Conlon has previously served as Chairman of the Board of Trustees of the Pontifical College Josephinum and as a member of the USCCB Committee on Marriage and Family Life. 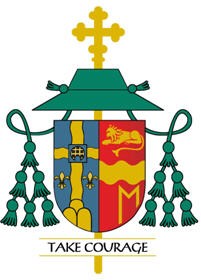